I'm looking for
product
in a size
size
. Show me the
colour
items.
Super Search

The Evolution of Platelet Rich Fibrin

Platelet concentrates have been utilized in medicine for over 3 decades owing to their ability to rapidly secrete growth factors. They have gained tremendous momentum as a regenerative agent derived from autologous sources capable of stimulating tissue regeneration in a number of medical fields.1, 2 Many years ago, it was proposed that by concentrating platelets utilizing a centrifugation device, autologous growth factors derived from blood could be collected from a platelet-rich plasma layer, and later utilized in surgical sites to promote local wound healing.1, 2 Today, it has been well established that platelet concentrates act as a potent mitogen capable of:

Various systematic reviews from multiple fields of medicine have now demonstrated their ability to support the regeneration of a number of cell types and tissues. Below we review the evolution of platelet concentrates.

Work led by Dr. Robert Marx in the 1990s led to the popular working name ‘platelet rich plasma’ (PRP). The goal of PRP was to collect the largest and highest concentrations of platelets/growth factors to be later utilized for regenerative purposes. The PRP protocol required extensive centrifugation time (typically over 30 minutes). During this process, the use of anti-coagulants (namely bovine thrombin or calcium chloride) was absolutely necessary in order to prevent clotting owing to the lengthy centrifugation times. The final composition of PRP contained over 95% platelets, known cells responsible for the active secretion of growth factors involved in wound healing.3, 4

Two reported drawbacks of PRP have since been reported in the literature. First, centrifugation times were deemed long (>30 minutes) and not practical for a variety of surgical procedures that may routinely be performed in many clinical practices. Furthermore, despite improving wound healing, it has since been revealed that clotting in general, is a necessary component of normal physiological wound healing. This limitation prevented optimal wound healing and led to the development of platelet rich fibrin. 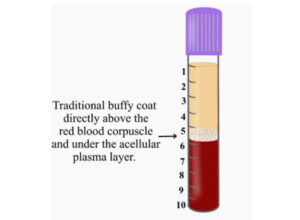 Various protocols and equipment have been introduced to isolate these cells but the concept remains that cells within the ‘buffy coat’ are isolated with use of anti-coagulants.

Owing to the drawback that the anticoagulants utilized in PRP prevented clotting, pioneering work led by Dr. Joseph Choukroun and Dr. David Dohan led to the development of platelet rich fibrin (PRF). The aim of PRF was to develop a second-generation platelet concentrate with anti-coagulant removal. Since anti-coagulants were removed, a much quicker working time was needed and the practitioner absolutely required that centrifugation began shortly thereafter blood draw (otherwise blood would clot). Furthermore, high g-force centrifugation protocols were utilized in order to separate blood layers in attempt to separate blood layers prior to clotting. The final spin cycle (2700 RPM for 12 minutes = ~700g), resulted in a plasma layer composed of a fibrin clot with entrapment of platelets and leukocytes. The main advantage of this fibrin matrix was the ability for it to release growth factors over an extended period of time while the fibrin clot was being degraded (as opposed to PRP which is a liquid/gel).5

Over the years, PRF has been termed L-PRF (for leukocyte and platelet rich fibrin) owing to the discovery that leukocytes play a central and key role during tissue regeneration. 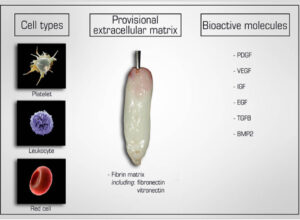 Figure: Natural components of PRF include 1) cell types (platelets, leucocytes and red blood cells), 2) a provisional extracellular matrix 3 dimensional scaffold fabricated from autologous fibrin (including fibronectin and vitronectin) as well as 3) a wide array of over 100 bioactive molecules including most notably PDGF, VEGF, IGF, EGF, TGF-beta and small quantities of BMP2.

While much of the research performed in the late 2000s and early 2010s was dedicated to the clinical uses and indications of L-PRF, major discoveries were made several years following extensive clinical use of L-PRF. In 2014, an oral maxillofacial surgeon in Germany by the name of Dr. Shahram Ghanaati observed histologically that following centrifugation at high g-forces (~700g – utilized in L-PRF protocols), the majority of leukocytes and platelets were in fact located at the base of L-PRF clots or even worse, within the red corpuscle blood layer at the bottom of centrifugation tubes.

Pioneering research within his laboratory led to the development of an advanced platelet rich fibrin (A-PRF) whereby lower centrifugation speeds (~200g) led to a PRF membrane with more evenly distributed platelets. These newer protocols more favorably released a higher concentration of growth factors over a 10 day period when compared to PRP or L-PRF. 7 In 2016/2017, Kobayashi and colleagues then demonstrated that further optimization of platelet rich fibrin could be further achieved by not only reducing centrifugation speed, but also time. The A-PRF protocol was therefore modified from 14 minutes at 200g, down to 8 minutes at 200g.

Two pitfalls exist with quantifying cell types found within PRF. Histological studies have been infrequently performed and show variability and bias in results. It becomes very difficult to assess where cells are located following cell separation. Commonly, following centrifugation, the plasma layer was then removed and sent for complete blood counts (CBC) as depicted below. 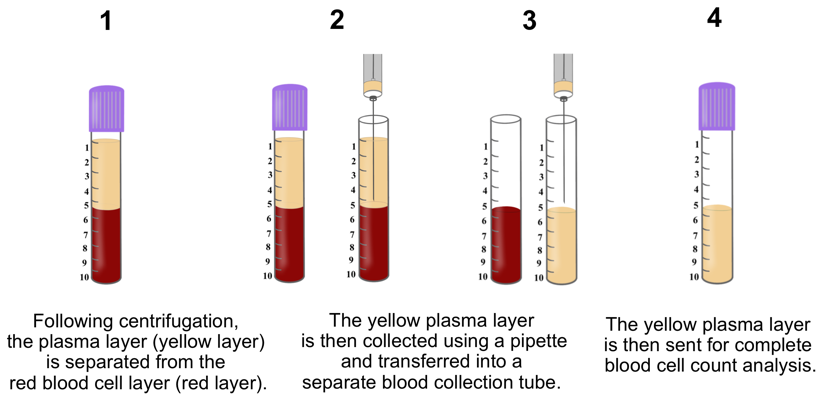 Figure: Commonly reported techniques for analysing the effects of centrifugation on platelet concentrates. 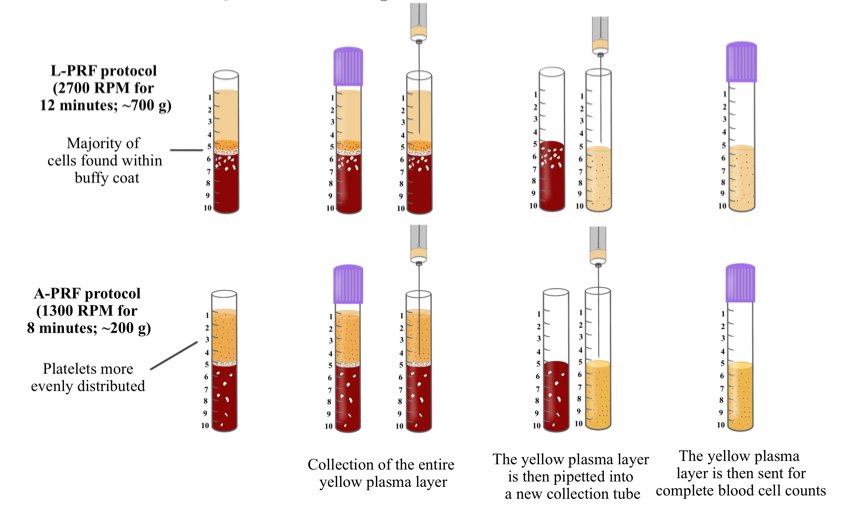 Figure: As a result, following centrifugation of both protocols, when both of these protocols are actually pipetting and sent for CBC analysis, only slight increases in cell concentrations is observed since the dense buffy coat layer produced using the L-PRF protocol is diluted with the rest of the sample. This does not reflect effectively the actual makeup within the PRF scaffold.

Figure: The concentration of cell types in each layer from 1mL down to the 10th mL sample utilizing the solid L-PRF protocol (2700RPM for 12 minutes; ~700g). Notice that the majority of platelets accumulated directly within the 5th layer in the buffy coat.

Figure 4: The concentration of cell types in each layer from 1mL down to the 10th mL sample utilizing the solid A-PRF protocol (1300RPM for 8 minutes; ~200g). Notice that specifically the platelets were more evenly distributed throughout the upper 5mL plasma layer when compared to L-PRF. Noteworthy however, the majority of white blood cells (leukocytes, neutrophils, lymphocytes and monocytes) are still found in the red blood layer 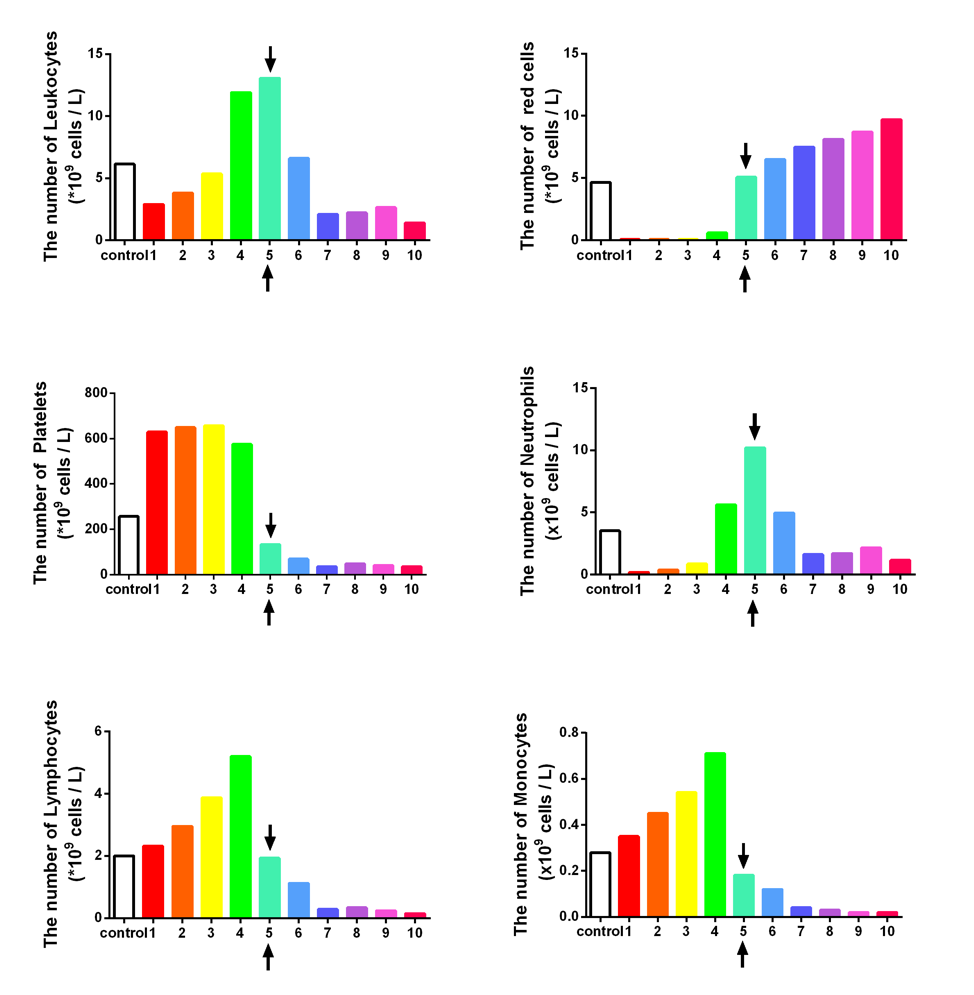 Figure: The concentration of cell types in each layer from 1mL down to the 10th mL sample utilizing the solid-PRF horizontal centrifugation protocol (700g for 8 minutes). Notice that most of the platelets, as well as white blood cells, are now more evenly distributed throughout the upper plasma layer. This is the first protocol generated for the production of PRF actually demonstrating an increase of white blood cells distributed throughout the upper PRF-layers.

Owing to the large RCF-values (~200-700g), cells are pushed towards the outside and downwards. On a fixed-angle centrifuge, cells are pushed towards the back of centrifugation tubes and then downwards/upwards based on cell density. These g-forces produce additional shear stress on cells as they separate based on density along the back walls of centrifugation tubes. In contrast, horizontal centrifugation allows for the free mobility of cells to separate into their appropriate layers based on density allowing for more optimal cell separation as well as less trauma/shear stress on cells. 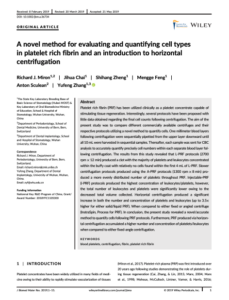 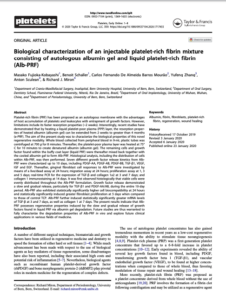